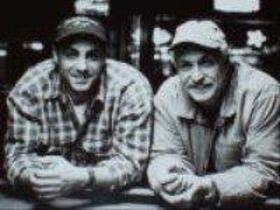 In 1991, Pete Tascarella Jr. joined his father in the shop. He already had spent many summers in the shop helping out where he could. He started while still going to college. Following somewhat in his father and grandfather’s footsteps, Pete Jr. also had a stint in law enforcement as an officer in New York State Supreme court from 2000 to 2004.
The two continue to make very traditional cues. “I grew up making traditional cues, and that’s something that I always want to do,” said Pete Jr. “But we also can make very contemporary cues without the use of a CNC.”
The two make traditional laminated blanks as well as full-spliced blanks. “Originally I used what was there [from George] for blanks, as well as buying some from Gus Szamboti and Burton Spain,” Peter Sr. explained. “But I showed my brother-in-law, Jim Cannon, what I needed for blanks, and in two days he had made fixtures so that we could start making our own! When we upgraded our mill, we refined the fixtures, and now Junior spends most of his time making blanks, which is tedious work. But he enjoys it.” Pete Jr. is also experimenting with full-spliced blanks with milled veneers because somebody told him it couldn’t be done.
Inlays were part of the Tascarella cues immediately, as the Balabushka lathe was outfitted with a Stanley router to drill holes in the cues for round inlays. If a diamond was needed, Balabushka had used a template over the hole and chipped away the rest of the wood to make the diamond. The Tascarellas used this method until the mid ‘90s when they introduced a manual pantograph to their shop. “So with the pantograph, it’s a lot less troublesome,” continued Pete Jr. “But I still learned to make inlays how Balabushka did them: by hand. I’m probably the youngest cue maker who still can do inlays that way.”

Although they still make cues like Balabushka made cues, they have developed alternative features and methods that they also incorporate.  Their choice of woods has expanded to include many of the more exotic woods, while their inlay designs are truly world class. They also have used non-traditional materials such as rose gold for a joint pin. One of the shop’s favorite innovations is the piloted ivory joint with the stainless steel bushing, combining the great hit of solid ivory with the concentric fit of a shaft as seen on a properly constructed steel joint.
Now that Pete Jr. is on board full time, the two hope to increase the number of cues they can make. The two strive for perfection when making cues but quickly point out that perfection is impossible. “We always notice little things that nobody in a hundred years would ever notice,” said Pete Sr. To that end, fit and finish and how a cue plays are more important than anything else to them. The Tascarellas also highlight that they hit with each cue to make sure the cue is as perfect as they can make it.

The result is that for the past 30 years, in part because of limited production and the strive for perfection, Tascarella cues have become some of the most sought-after cues in the growing cue market for both playing and collection. Pennsylvania’s Marcus Solt, owner of one of the finest collections of Tascarella cues assembled, shares his reasons for buying from the Tascarellas. “The main reason I started collecting [Tascarella Cues] was because of the old-school hit,” Solt explained. “I also enjoyed all of my conversations with Pete, even before he knew me. And I respected him for that.”
The Balabushka legacy has continued through Pete Tascarella and his son. And Pete Jr. hopes that someday, he can pass on the tradition to his children. The pool world can now be assured that the knowledge and experience of Balabushka are not lost to the ages, and instead have served as the ultimate base on which the Tascarellas have expanded and defined their own legacy as two of pool and billiards’ greatest cue makers.

Pete Tascarella was born in Brooklyn, NY, in 1943. He was the son of a city cop. His mother worked, but she was also a homemaker. Pete grew up on Rockaway Beach, spending much of his life by the water. Because his father’s family owned a furniture factory, Pete grew up learning to work with his hands.

Pete and his wife Catherine have two children, Christina and Pete Jr. “I first laid eyes on my wife when she moved to Rockaway Beach, New York, where I lived and grew up,” said Pete. “She was twelve; I was fifteen. I told my mother I was going to marry her, and she laughed!” The two have been married since May 1966. They moved to Long Island in 1970. Today, Pete Jr. works side by side with
his dad in the cue shop.

The elder Tascarella was introduced to pool at the fairly late age of 19. An avid and very accomplished pool player, Pete had purchased his own personal cues as many serious pool players did. In 1965, after hearing that the greatest cue maker in the world lived a few miles away in Brooklyn, he visited the Balabushka shop and purchased a cue. Pete recalled laughing about the name because it sounded like “babushka,” the scarf headpiece worn by Russian women.

Tascarella joined the police force in 1966, ultimately retiring as a detective in the Organized Crime Control Bureau. Early in his career in 1971, Pete had received an Honorable Mention award for his part in stopping an armed robbery attempt. The annual award ceremony was televised locally. Upon Pete’s following visit to the Balabushka shop, George voiced his recognition of Pete.  “He said to me, ‘I know you! I know you!’” recalled Pete. “And I told him, ‘Of course you know me, George! I buy cues from you!’”

But George recalled that he knew Pete as a police officer after seeing him on the television. “After that, George saw me as a cop and not just another customer,” shared Tascarella. “He started treating me a little differently and more openly.” Every chance Pete had when he was in the area, he would stop by and visit Balabushka to say hello and have a coffee.

“Normally, if a customer walked in the shop, he would shut the machines off and lean against the machines like you see in the photos of him. It’s not easy anyway to continue working while someone is in the shop,” explained Tascarella. “But after awhile, he would continue some of the work he was doing when I visited, before he stopped the machines.” In general, Balabushka didn’t talk about cue-making, what he was doing, or what he had planned for the future of his cue-making.

Out of necessity, Pete learned to re-tip his own cues and change ferrules and started doing some of these simpler repairs for the players in the local poolroom. He set up an electric drill to spin the shaft.
“It was kind of crude,” he remembered. “But back then, you couldn’t get anything relative to cue repair. Today you can open up a magazine; you can get components and supplies. Back then there was nothing.”
On December 5, 1975, George Balabushka passed away. In March 1976, Pete contacted Balabushka’s widow Josephine, looking for a supplier for some Irish linen to rewrap his cue. “I asked
Josephine where I could get some,” said Tascarella. “And she said that she still had some in his shop.” 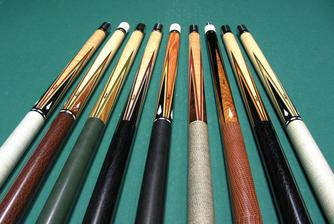 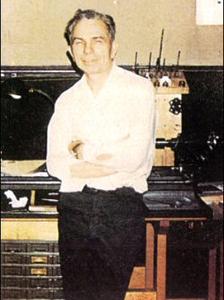 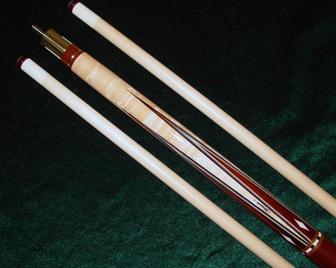 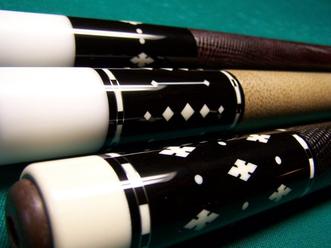 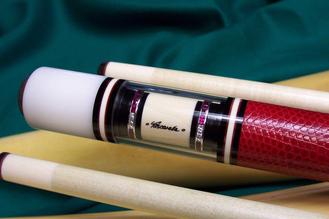 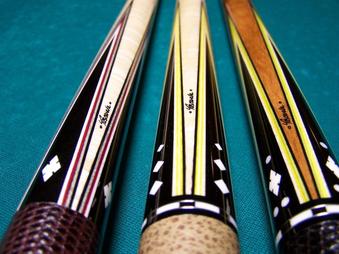 Purchasing a Gold Mine

Pete and his friend Bill Larkin went to visit Josephine and saw that the entire Balabushka cue shop was still intact, except for the band saw, which had already been sold. The lathe Balabushka used
was still there, along with several hand tools and fixtures. “She was looking to sell everything, but several people who had offered to buy it were looking to steal it,” stated Pete. “We asked what she wanted for it, and we decided to buy it for whatever she asked for.”

The decision to buy the shop was solidified when Josephine brought out eighteen partial cues in various stages of assembly as well as yet-to-be-used full-spliced and half-spliced blanks from Szamboti and Burton Spain. The sale also included all of George’s notes, sketches, and dimensions, as well as the multitude of invoices for the components that George purchased. Pete speculated that probably no other cue maker saw these notes and partial assemblies. “If a cue maker who was interested in the equipment saw these, why wouldn’t they buy the shop?” he asked rhetorically.

The two loaded up everything but left a lot of hardwood behind.  “I don’t know what we were thinking,” said Tascarella with disbelief.  “We got a good amount of wood but left shelves and shelves of it behind.” Aside from maple and ebony, the wood left behind included plenty of Brazilian rosewood, which has become increasingly difficult to find.

“I used all the information, the notes, and the partials, as a guide,” explained Pete. “I knew that the tip went on the ferrule and the ferrule went on the shaft. But with the partials in various stages, it was fairly simple to see what went where. It was like a jigsaw puzzle that you could see how a cue was put together.”
Bill Larkin, who was a diesel mechanic, decided to stay with his occupation, never participating in any of the cue-building equipment fun. Pete eventually offered to buy out his partner. The price? “Bill asked me to build a couple of cues for him. That’s all,” said Pete.
It took Pete about two years before he really started to build any cues. “I wasn’t really trying to make cues. I just did some repairs and shafts,” Pete explained. “I spent more time being a cop. I also spent time converting the garage into a shop. I didn’t have it in my mind to become a full-time cue
maker.” Pete was doing repairs for the local area, as there was nobody around to do them anymore. There was also nobody in the area making cues, so eventually he filled that void.
“My first cue was made with Balabushka components and Balabushka dimensions,” said Pete. “They looked like a Balabushka!” Tascarella immediately started to use brown phenolic, where George would use black to get away from looking like a Balabushka. He thinks that probably ten of his earliest
cues could be confused with a Balabushka.
That being said, people would still sell his cues as Balabushkas. He was surprised when he was asked about when he was going to start selling his cues when at the time he had already sold several to the local area. “That was my work, but they weren’t being recognized as my cues,” he expressed.
“Shortly after that, I started signing them.”

“I believe I was the first guy making break/jump cues,”continued Pete. “1976, Pat Fleming came to the area with a house cue that was cut to a forty-inch length. And he was jumping over balls like crazy. So, a friend suggested to me to joint a cue at that point to make a break/jump cue.” From there, Pete
started making break/jump cues. A friend wanted Tascarella to patent the idea, but it didn’t make much sense to Pete to do so at the time.
“Back then, nobody shared anything. Gus and I would talk, but not much about cues. Richard Black also was good guy to talk to,” Pete recalled. “Today, I find a totally different atmosphere. So many people are so open. A few years ago, Keith Josey called, and since he was so far away, I had no problem sharing information. He in turn shared information with me on the pantograph.” Tascarella has also worked with other young production and custom cue makers, but he demands that if his name is associated with those cues, the cue must uphold the same standard of quality to which he adheres.